The Right Technology for the Application 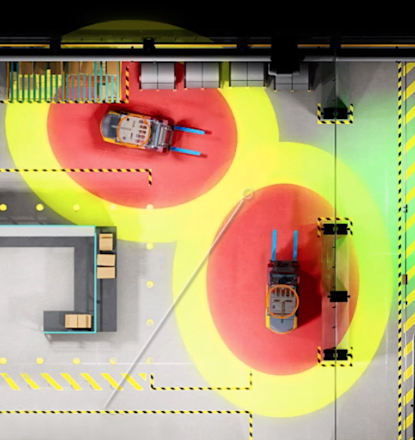 "In work environments there is a great need for ways to automatically protect pedestrians from being hit by vehicles or machines, to prevent machines from colliding with each other, and to keep pedestrians and machines from dangerous areas."

Many proximity devices are on the market, using many technologies. Most of these devices perform simple tasks such as turning on lights, opening doors, selecting menu options, etc. RFID devices are also sometimes used. And, some have adapted RFID sensors, both passive and active types, for the purpose of keeping pedestrians from getting hit by vehicles.
In work environments there is a great need for ways to automatically protect pedestrians from being hit by vehicles or machines, to prevent machines from colliding with each other, and to keep pedestrians and machines from dangerous areas. Since there are so many proximity devices available, including RFID sensors of numerous types, one might conclude that these devices should be the solution to keeping safety in the work environments involving mobile machines and vehicles.
Methodical System Engineering shows that using these simplistic devices will not satisfy the safety need.
Consider the essential, basic performance requirements for a proximity safety system in an industrial setting:
1. Establish precise boundaries between safe and unsafe zones
2. Reliably warn both pedestrians and operators if there is potential danger
3. Provide means to signal a vehicle to slow down or stop
4. Do not produce nuisance alarms
5. Compact packaging to easily be integrated into a vehicle and/or to be carried
The first requirement above essentially eliminates most types of proximity devices, including RFID. The only known method of producing boundaries around vehicles, with the desired precision and stability, is to produce magnetic fields. Low frequency magnetic fields can be produced that are of a precise size and do not easily change their shape when other objects are placed within their range. Shaped fields are effective for creating types of hazardous or safe zones.
This cannot be said, for example, for RFID devices that emit electromagnetic fields that are either blocked or attenuated by most materials. Even the human body will attenuate RFID emissions so that when measured after passing through a person’s body, the field strength is measurably less than if unimpeded by the body. Magnetic fields remain unchanged in size and shape by persons or objects placed between their source and the point of measurement. Even metallic objects usually have little effect, especially when compared with RF transmissions, because the magnetic field is in the shape of a solid ellipsoid and goes around the objects rather than having to pass though objects to reach the point of measuremen
Radar is directional and cannot practically be configured to provide zones around vehicles that distinguish between safe and unsafe locations.
Lasers with pattern recognition has been under study for many years but is unable to reliable identify pedestrians in an industrial setting so as to determine if they are in in jeopardy or are in a safe location.
Optics and Acoustics are utilized in some applications but after much research are not able to distinguish between pedestrians and other objects in the direction of travel. Industrial settings usually involve numerous kinds of objects and obstructions. Also, the need for safety is greater than just in the direction of travel. Acoustical systems are simply not suitable for most industrial settings except possibly for cars and trucks in a very limited application.
Then there is the second requirement for a proximity system to be active, rather than passive. It is not enough to warn only the vehicle operator or the pedestrian. Both must be accurately warned, and this must be done regardless of the orientation of the pedestrian.
The third requirement is to provide signals to vehicles to slow or stop the vehicles. Most non-magnetic type proximity systems have proven to not be reliable enough for slowing or stopping vehicles or mobile machines. Nuisance alarms are detrimental to a successful proximity system but if vehicles are slowed or stopped when there is not a good reason, the system will quickly be taken out of operation. Such false actions cannot be tolerated by the industrial operation.
The fourth requirement is to avoid nuisance alarms, historically one of the most frequent causes of proximity systems being quickly rejected. Use of magnetic fields, as discussed regarding Requirement #1 above, is crucial to avoiding nuisance alarms. Most of the reasons that other technologies cannot establish reliable zones are also reasons why they produce nuisance alarms. Even when magnetic fields are used to produce safe and unsafe zone markers, other steps must be taken to avoid nuisance alarms.
A method must be employed to prevent the magnetic fields being produced by multiple magnetic field generators from colliding with each other. If they do collide, the result is a composite magnetic field that produce very different field strengths at the point of measurement, such as at the pedestrian being protected. This can result in failure to give warning but also will produce nuisance alarms. Review of the Frederick Patents identified earlier show how this is avoided.
HITNOT systems are easy to install on vehicles and machines.