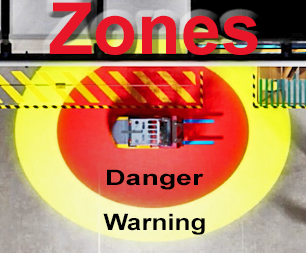 Review of US Patents for Proximity Systems confirms that HITNOT® is the clear leader in development of magnetic field technology for protecting pedestrians and preventing collisions. It is the only technology shown to be highly reliable in essentially all industrial applications. Ten milestone US patents protect fundamental aspects of HITNOT® proximity protection.

During the middle of the 1970’s, the Bureau of Mines performed numerous studies and investigations into the possible use of magnetic fields to accomplish communications in underground mines. Many analytical studies and tests were performed by major engineering firms, such as Arthur D. Little and detailed reports were prepared. Mr. William Schiffbauer was an employee of the Bureau of Mines during that time and participated in the investigation and testing. Much was learned and extensively documented about the characteristics and operational parameters of magnetic fields, especially for mining environments.

After the Bureau of Mines was abolished, many of the personnel were transferred into the National Institute of Safety and Health (NIOSH), as part of the Centers for Disease Control. Mr. Schiffbauer retained copies of most of those outstanding technical reports and continued his interest into magnetic fields. He and others pursued the idea of providing safety for personnel working close to mining equipment and he assembled magnetic devices and performed various tests at NIOSH to confirm and better develop his ideas.

Mr. Schiffbauer was awarded two patents; the second one presenting the basic concept of magnetic fields being used for Proximity Detection by companies like FEP and Strata for use on vehicles and mobile equipment in a wide range of environments.

This second Schiffbauer patent ( Patent # 6,810,353) was issued by the USPTO on October 26, 2004. This patent disclosed to the mining industry the use of magnetic fields, produced by generators mounted on continuous miners, and detected by a Personal Alarm Device carried by pedestrians. The concept is closed loop so that the pedestrian is warned but a UHF signal is returned to the machine to be used to warn the operator as well.

Frederick Mining Controls, LLC was the first company to develop a proximity safety system that MSHA approved for use in underground coal mining. This system also was the first to be tested in a 30-day pilot program under the direct control of MSHA, conducted in the Jones Fork mine in eastern Kentucky. Important inventions were incorporated into this system. Refer to Patent # 7,420,471 for more details about the system design.

This first underground proximity system approved for coal mining has numerous features that make it suitable for coal mining and is formed around the use of low frequency magnetic fields. Functionally, it is a closed-loop or active system. A generator on a machine produces a magnetic field which is detected by a Personal Alarm Device (PAD) carried by a pedestrian. When the PAD detects the magnetic field, a UHF response is sent back to the generator. Thus, the pedestrian, the system, and the operator of the machine can each be warned of an unsafe condition, so that actions can be taken to stop the machine and warnings can be given to all.

Low frequency magnetic fields can be made to be very precise and stable so that safe zones or danger zones can be relied upon to remain in their designed or chosen locations. They do not reflect from metallic or other conducting surfaces to cause multi-path signals that lead to system failure. These fields also easily penetrate earth formations and most other materials so that detecting pedestrians is not blocked by most materials. Also, since the magnetic fields are produced in the shape of a solid ellipsoid, the fields go around objects that are between a magnetic field generator and a pedestrian.

These fundamental characteristics of a closed-loop, magnetically-based technology are also ideal for non-mining applications.

Complex operational environments in which multiple machines and multiple pedestrians pose additional challenges to proximity detection systems. Magnetic field generators on each machine must produce multiple fields each second in order to be responsive. Personal Alarm Devices in range of the generators must respond to the fields. With increasing numbers of active elements, the probability of conflicts typically grow exponentially. Conflicts are much greater if the magnetic fields and responses are required to carry information such as I.D.s or safety information.

This problem with conflicts between signals is solved by using Shaped Fields, which is a combination of timing innovations, in combination with the earlier inventions. Shaped Fields are produced by sequentially generating magnetic fields. This allows detection of pedestrians and vehicles in an unlimited number of field shapes and configurations. See Patents # 8,232,888 and 8,847,780 for additional details.

In later years, as the technology has been adapted to a wide variety of industrial situations, these system design choices and innovations have been crucial to even more complex mechanized areas where other devices are needed to also be operated in a work area.

4. 2007: Proximity Detection systems with Magnetic Silent Zones that prevent Pedestrians or Operators from being warned when the Pedestrian is at a Safe Location in a dangerous environment. (Frederick Patent # 8,446,277)

Certain work areas include mobile machines and pedestrians working closely together. Both must be present at almost the same time. Facilities are sometimes configured so that safe spots or safe areas are within the work area where a pedestrian can retreat to be safe. However, this provision is only useful if the pedestrian recognizes the need to retreat to the safe area and moves into the appropriate safe area, which, unfortunately, does not always happen.

Collision Avoidance, using Magnetic Fields, was made possible by placing both a generator and an alarm device on vehicles. The generator on one vehicle produces a magnetic field which is then detected and measured by the alarm device on a second vehicle. The second vehicle can also have a generator that produces a magnetic field that is detected and measured by an alarm device on the first vehicle. The size of the fields produced for each vehicle may be adjusted differently, based on its speed, size and/or ability to slow down. For very large vehicles or machines, generators and alarm devices may be installed on both ends of the vehicle or machine. These systems may also be arranged so as to control traffic in and around dangerous areas and intersections.

The various inventions disclosed in previous Frederick Patents are important to making the Collision Avoidance both effective and reliable.

6. 2013: Controllers for Mechanized Areas that include Proximity Systems based on Low Frequency Magnetic Fields is a patented revolutionary concept. (Frederick Patent #2014191869)

Manufacturing operations involving large machines, congested materials handling areas and a variety of industrial operations have special safety needs. Pedestrians are required to share the same spaces along with various mobile machines, and may also be working in conjunction with large machines that are not movable. Magnetic fields can be produced that interact with the mobile machines and with pedestrians so as to prevent them from being in the same space at the same moment. Also, the safety systems and/or the mobile vehicles can be commanded or directed to modify or limit their functions in order to reduce the chance of an unsafe condition.

An invention called the “Mechanized Area Controller” makes these real-time facility and equipment adaptions a reality. See Frederick Patent Application Publication # 2014191869. Patents have been issued or are pending in other countries.

By utilizing magnetic fields, designated areas can be precisely defined in which equipment, safety systems, and personnel interact differently than they would otherwise operate. More than one of these controlled areas may exist within a facility so that the way equipment and safety systems function is automatically adjusted to be optimized for each area. For example, fork trucks or clamp trucks may be forced to move slower or their proximity ranges may be limited or both. In some cases pedestrian warnings can be automatically muted.

By use of warning devices, personnel also adjust their actions to respond to changing conditions. For example, a light or sounder can alert pedestrians that a fork truck is approaching the area in which they are working. And/or warnings can be given to operators of vehicles that pedestrians are present in an area that they are entering. Or, if there is a protected work area that is adjacent to vehicles that are actively moving, the Personal Alarm Devices being carried by the pedestrians in the protected area will not receive warnings nor will the operators of the vehicles.

Automatically Guided Vehicles are becoming more widely used for materials handling tasks. These AGVs are usually complex and expensive and sometimes have safety features to help prevent pedestrians from being hit, pinched or crushed. However, most of the safety features are not sufficiently reliable to provide the level of protection to pedestrians that is needed. Further, they are usually not effective for preventing collisions with man-operated vehicles.

In 2014, AGVs were outfitted with HITNOT® systems because of their high reliability for such operations. This is another milestone.

8. Other Frederick-Issued Patents and Published Patent Applications describe related and important inventions that accommodate specialized needs. Also, approximately 40 Frederick patents related to proximity safety systems have been filed, issued, and/or published outside the US.